Over 30 people attended Susan Harris' presentation to the Whangarei Heads Citizens' Association's AGM on Thursday 19 March 2015.  Interest was keen, with many questions from the floor. 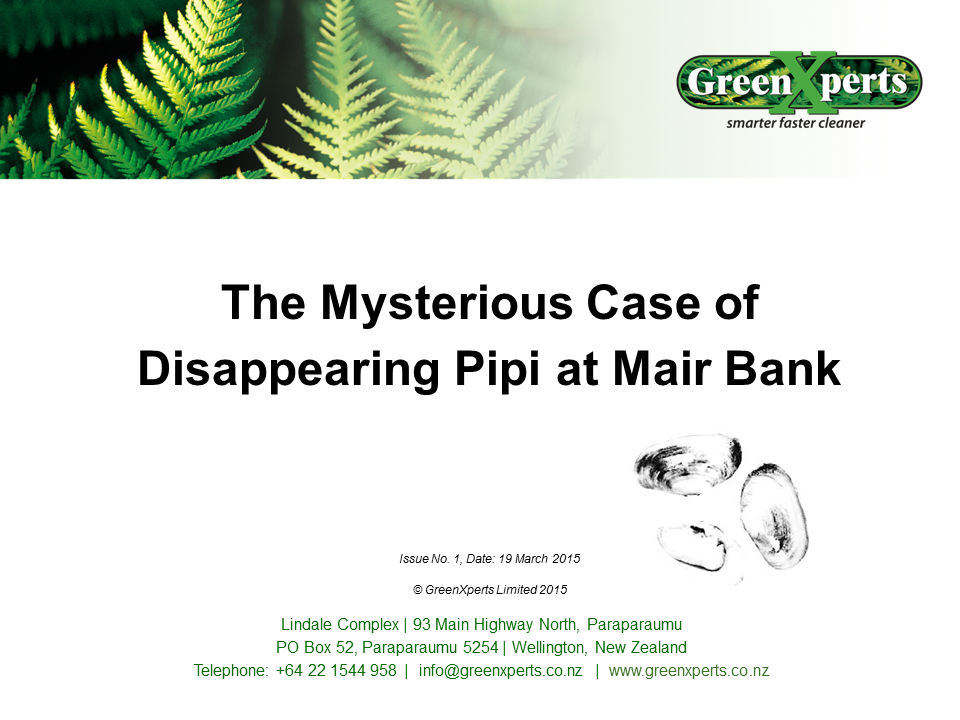 Posted by 4sustainablesue at 10:01 No comments:

The Mysterious Case of Disappearing Pipi at Mair Bank, and Potential Impacts on Marsden Point’s Stability

Massive reduction in pipi numbers since 2005
The latest scientific reports from the Northland Regional Council (NRC) and the Ministry for Primary Industries (MPI) show a massive 99.3% drop in both pipi biomass (by tonne) and abundance (by numbers), and two successive ‘recruitment failures’ (juveniles not achieving breeding age) on Mair Bank over the past ten years.  Only 63 individual pipi of any size were found in 140 sample sites during the February 2014 survey.  These grim findings led MPI to impose a total ban on pipi harvesting from October 2014 onward.

Potential impacts upon Marsden Point’s stability
It has been acknowledged by authorities for over 30 years that the layers of old pipi shells and live pipis on Mair Bank armour and stabilise the Whangarei Harbour entrance and Marsden Point.  In 1983 it was estimated that the pipi banks were equivalent to at least $4 billion (2014 value) in harbour works.  Should the pipi banks be compromised, then there could be impacts upon the stability of Marsden Point and its associated facilities.

Possible causes of pipi disappearance
Possible causes of pipi disappearance could include: climate change (changes in currents and water acidity); Mair Bank movement (reducing habitable area); contaminants in the water and/or sediment (causing pipi to depart Mair Bank and perish in deeper colder waters, and/or recruitment failure); and selective removal of the breeding population (the larger pipi) by pipi pickers.  There is probably a combination of causes, but at present there is insufficient evidence to determine what has happened.  The latest scientific reports comment that the available information has not been collected in a consistent or comprehensive manner, making it difficult for scientists to pin down causes, assess risks, or propose remedies.

What the authorities are doing
NRC is the coastal marine area authority, and MPI the fisheries authority.  Several reports have been commissioned and discussed with stakeholders by both NRC and MPI.  Currently there seems to be a hiatus in activity following the sobering results of the 2014 survey and the institution of the total ban.

Questions that need answering
A number of important questions need answering.  What has happened since 2005 to cause the pipi to die?  Can pipi die-out be remedied?  Will the disappearance of the pipi endanger the stability of Marsden Point, and if so, when, under what conditions, and what can be done about it?  Will the total ban on pipi picking rebuild the pipi population, or is more action needed?  What effects will Northport’s proposed deepening of the harbour channel have upon the integrity of Mair Bank and Marsden Bank?

The Whangarei Harbour and Marsden Point are valuable national assets worth billions of dollars.  The disappearance of the pipi that stabilise the harbour entrance is a national issue that affects us all, and one that must be addressed competently.  Current information is patchy, incomplete and inconclusive.  A properly scoped and adequately funded Mair Bank Sustainable Management and Recovery Plan needs to be commissioned immediately by MPI as lead authority, supported by all the stakeholders involved.  It will be interesting to see what the next steps will be by the authorities responsible for the sustainable management of the Whangarei Harbour and its priceless pipi.

Posted by 4sustainablesue at 09:48 No comments: