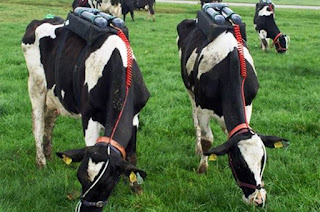 A recent article in The Guardian reports that climate change denial is changing tack from outright denial to a clever 'deflection' campaign.  This focuses on making individuals feel guilty about their food and travel choices, and then descends into 'doomism', which leads to hopelessness and inaction.  In this way, society is misled into failing to deal with the main cause of climate change - fossil fuel use.

Recently the issue of methane emissions from farm animals has been controversial in New Zealand. The Agriculture sector has pointed out that methane is a short-lived GHG (about 14 years), while others have countered that it has a high Global Warming Potential (GWP), 25 times stronger than carbon dioxide.  The New Zealand Government has agreed to the sector's proposal to leave agriculture out of the New Zealand Emissions Trading Scheme until 2025, giving the sector until 2022 to come up with methods for reducing farm emissions.

One way to reduce farm emissions is to reduce the number of animals farmed.  Leaving aside land use stocking and water quality issues, it would seem extraordinary that a food producing nation would be asked to consider reducing its production levels in a world that needs more food, not less.  And this from a pasture-based farming system in New Zealand that has a much lower overall environmental footprint (GHG plus everything else) and animal welfare footprint than barn-based intensive stock feeding regimes overseas.

So are methane emissions from farm animals really a problem locally or globally, compared to fossil fuel emissions?  Take a quick look across the latest science and we find:


There are some significant changes to note:

(1) Fossil-fuel sourced carbon dioxide sources have increased to 87% of global carbon emissions in the last ten years, so that they almost completely dominate the global GHG cycle;
(2) Global methane emissions over time have had no impact compared to fossil-fuel sourced carbon dioxide (so far);
(3) Global methane emissions are recently up from permafrost melting and natural gas production;
(4) Globally, New Zealand's cattle populations and their emissions do not register at all on any statistic; and,
(5) Local increases in New Zealand's dairy herd and their emissions have impact in New Zealand alone.

And so what to conclude?

Methane emissions from pasture-based farm animals are a "green herring" in New Zealand, and most probably globally.

The reduction and reversal of global warming depends almost entirely upon reducing fossil fuel use.  Switch away from fossil fuels and the job is mostly done.  Reducing animal farming in New Zealand will make absolutely no difference to world GHG levels, and would be a pointless exercise in climate guilt.  Another 'deflection' away from dealing with the real problem.

Because of the structure of the Paris Climate Agreement and New Zealand's unusual GHG profile, the nation could be held fiscally responsible for methane emissions that are just a very few cattle breaths in reality, with no global impact.  There could, however, be a very high impact on the nation's pocket if the situation isn't shrewdly managed.

And one wonders...how many more green herrings are out there?

Posted by 4sustainablesue at 16:12 No comments: